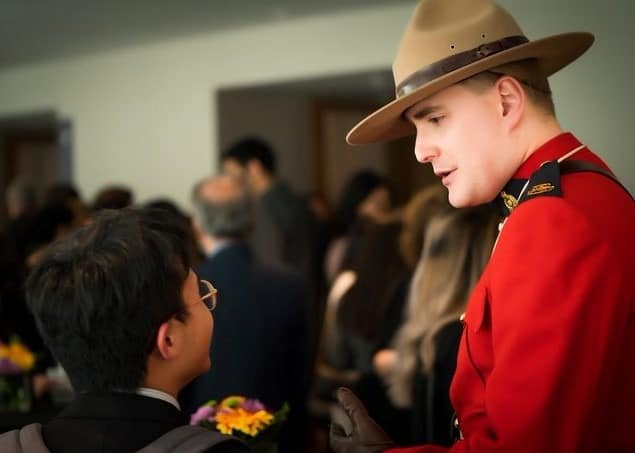 Memoirs of a Canadian Mountie

To start, I wanted to say a big, “Hunter’s Halloo!” from the west coast of Canada, and to introduce myself – I am a first-generation Canadian and a member of the Royal Canadian Mounted Police. I am currently posted to Surrey Detachment in British Columbia, where I am a School Resource Officer. I am thrilled to write a blog for the Clan Hunter website and I hope you get some enjoyment from my brief tales of a Hunter policing in Canada, the ‘Memoirs of a Mountie’.

For anyone who is not familiar with Canada or what a ‘Mountie’ is, I always reference the 90’s TV show, ‘Due South’, which depicts the iconic red serge jacket, highbrown boots (polished to a high standard) and wide-brimmed stetson hat. I am a police officer, but parts of my duties are ceremonial where I get to don that iconic uniform.

For my first tale, I thought I would share an incredible photo with you all – the day 112 Mounties in red serge marched out onto the Capilano Suspension Bridge in North Vancouver, BC, and posed for a unique photograph to celebrate the 150th birthday of Canada (in the photo, I’m the 8th Mountie from the right).

The photo shoot occurred on June 8th, 2017, and it was unseasonably wet and cold. Fortunately, even when there is terrible weather, it is difficult to dampen the mood when a group of Mounties get together en masse (especially when there’s coffee and pastries on hand). After we had our morning java, it was time to head out towards the suspension bridge. This was made interesting as the rain made the floor wet and the brims of our Stetsons sag. The suspension bridge is 140 metres (460ft) long and 70 metres (230ft) above the Capilano River and marching out onto it in the rain with a large number of 200lb Mounties was, for want of a better word, ‘exhilarating’. All I could do was march, stay on my feet, try to ignore the ominous swaying of the bridge, and not look down. Despite the ‘exhilaration’, I had a great time with my colleagues and in being a part of Canada’s birthday celebration that day.

For my second tale (thank you for indulging me!), I wanted to share a success story with you.

In 2016, I responded to help a family and met a remarkable young man, Brahmroop ‘Brahm’ Sandhu. Brahm (at 16 years old) was already volunteering with his local crime prevention society and had given over 2000 hours of his own time to making his community a safer place for all. When I arrived to the call for service, it was clear that Brahm would benefit from some friendly guidance and I spent an hour talking to him. At the time, I didn’t think much of it – I was just doing the right thing as this young man needed help. Over the next couple of years, Brahm and I stayed in contact and he made a point of thanking me for spending the time speaking with him. During this period, Brahm began a course of study in law enforcement (his choice) and began working in Canadian border security and as a jail guard, all the while keeping in touch with me and occasionally asking for advice before taking next steps in his career.

In 2019, I was flattered when I learned that Brahm, along with my supervisor, had nominated me for an award – Police Officer of the Year. In his nomination, Brahm had written, “[starting from 2016]…Constable Wright has changed my life forever.” To make a long story short, I got to attend a fancy ceremony and I was awarded the honour. My take away from the evening was that I am very lucky to be doing a job that I love. I get to speak with people every day and help them with whatever their problem may be. The take away I would hope anyone reading this story carries with them is that you may never know the impression you leave on others (even from a brief conversation, like my first interaction with Brahm). That being aware of the needs of others, recognizing when it is within your ability to help someone, and giving that person a little piece of your time can have extraordinary and unexpected results, and I challenge you all, whenever it is within your ability, to give a little of your time to someone else.