Granted by King Robert II in 1374 View the Timeline

The oldest document in the possession of the family is a Royal Charter from King Robert II of Scotland to William Hunter, 10th laird, dated 1374  ‘For faithful services rendered to him of the lands of Ardneil to be held by the said William Hunter and heirs-male of his body of the Crown for payment of One Silver Penny at Ardneil on WhitSunday.’ Ardneil is the neighbouring farm to Hunterston. 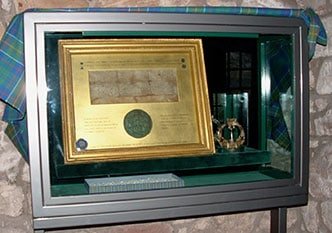 A translation from the Latin reads:

Robert, by the grace of God, King of Scots, to All Good Men of his Whole Land, Clerics and Laymen, Greetings: Know Ye that we have given, granted and by this our present Charter have confirmed to our loved and faithful William Hunter for his faithful service rendered and to be rendered to us, that whole land of Arnell (Ardneil) with pertinents which belonged to Andrew Campbell, Knight, and which the said Andrew, not led by force or fear nor falling into error but of his own free and pure will, gave up and purely and simply resigned to us by staff and baton and wholly renounced in all time coming for himself and his heirs, with all right and title that he had or might have in the said land with the pertinents: to hold and have to the said William and his heirs in fee and heritage by all their right marches and bounds, with all and singular liberties, commodities, easements and just pertinents whatsoever belonging or in what manner soever shall be justly known to belong in future to the said land, freely, quietly, wholly well and in peace. The said William and his heirs foresaid rendering therefor yearly to us and our heirs one penny of silver only at the said land of Arnell at the feast of Pentecost in the name of Blench Ferme for wards, reliefs, marriages, burdens and other services whatsoever. In testimony of which thing we have commanded our seal to be appended to our present Charter. 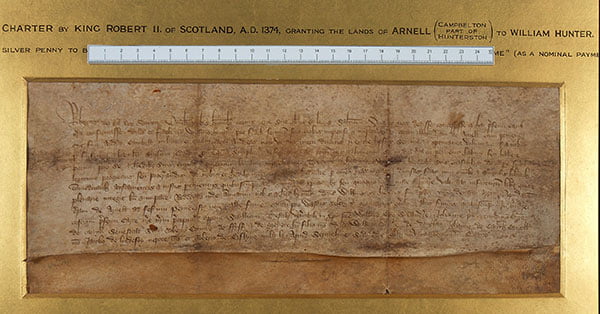 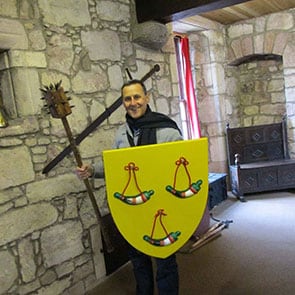 The Venerable Father in Christ, William, Bishop of St. Andrews:
John our First born Earl of Carryk, Steward of Scotland:
Robert Earl of Fyfe and of Meneteth, Our beloved son:
William Earl of Douglas:
John of Carryk our Chancellor:
James of Lyndesay our Nephew:
And Robert of Erskyne,
Knights.
At Strivelyne (Stirling) the Second day of May, the Fourth Year of Our Reign (1374).