Parts five and six of The Battle of Largs retold in nine parts by Todd Ferguson after research by Glasgow Archaeological Society. 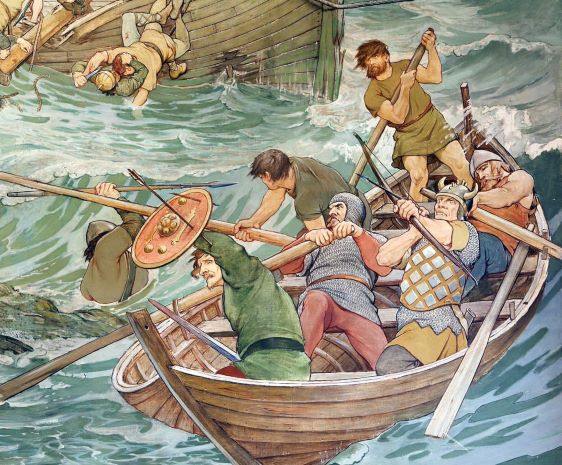 Todd Ferguson is a local councillor for North Ayrshire, Scotland. Born and bred in West Kilbride, Todd takes a huge interest in his hometown, both the past and the present. Next to politics, he is a graduate of archaeology and in this re-telling of the Battle of Largs, Todd uses research by the Glasgow Archaeological Society which adds depth to his story.

The other expedition to Loch Long and the Storm arrives with a vengeance. 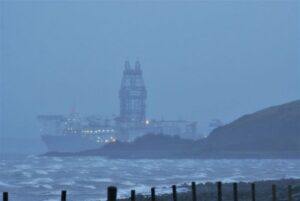 Photo credit: my own collection and I’ve picked this one to demonstrate that even 758 years later when the wind picks up in this stretch of the Clyde there is very little we can do about it. If the Valaris DS4, at 748 feet with 96,000 tonne displacement gets blown off a mooring, what chance did Haakon and his fleet stand.

The Battle of Largs continues:

After the truce negotiations fell through and the Scots had delayed long enough to push the date further into autumn Haakon had finally had enough of talking. He sent sixty ships, almost half his fleet up the Clyde towards Loch Long and Arrochar at its head. This expedition never really gets much air time in the story of 1263 but it is important because most of the Norse-Gaels accompanied this force. It was almost a local force (probably because they knew the area better than Haakon and co).

The Hebridean force was led by Magnus king of Man (Isle of Man), king Dubhghall mentioned in other posts, his brother Ailean mac Ruaidhri, and two other high profile Western Islanders called Murchadh Mac Suibhne (McSween) and Aonghus Mor mac Dohmhnaill (MacDonald). Basically all of the original Gaelic kindred families with huge power had sided with the Norse, mainly because, at least for the last two, the king of Scots had demanded their sons as hostages. Nonetheless, they enthusiastically took part in the despoliation of lands during this raid. The Norse were commanded by Vigleik priest’s son and Ivar holm.

One of the most amazing feats of this campaign was that they apparently landed in Arrochar and carried their longships over the mountains and down into Loch Lomond so they could continue raiding. They apparently wasted the land belonging to the earl of Lennox with fire and sword, all around and the islands themselves in Loch Lomond, which it says were ‘well tilled’ ie given over to agriculture. Apparently every spare bit of arable land back then was maximised for productive means, far in advance of our environmentally sustainable conscious modern conceptions.

It is said that Ailean: ‘…went almost across Scotland slew many a man. He took many hundred neat, and did much ravage.’

On the way back they ran into the storm and 10 ships were destroyed and Ivar holm became sick and died.

Saturday 29th Haakon was still laying up in the Cumbraes – it appears that they remained in their boats, and not on land which I have always found strange. Awnings were erected which they slept under.

Tuesday 2nd October early morning before day, while it was still dark, ‘…they called out who kept watch at the moorings of the kings ship that a bark was driving on the cables forward.’

Remember that figurehead of gold and the beaks of similar structure well the bark apparently struck the figurehead of the kings ship and carried away the beaks. So, somewhere lying in the watery depths between Cumbrae and Largs are parts of king Haakon’s ship covered in gold. What a find that would be. It is not clear from the source that the figurehead was taken as well.

Also, I mentioned about the supplies running low – a bark was essentially a ship that carried all of the supplies for campaigning. This becomes an important centre piece to events on the Largs shingle.

During the storm basically the bark became tangled in Haakon’s ship and the anchor was cut. It apparently became stuck maybe as the tides went out and it was driven onto Cumbrae but that morning with the high tide it drifted up on the Scottish coast. Apparently, ‘the wind began to wax all at once.’

As we all live locally there is a definite lull at the changing of the tides, but it soon returns with a vengeance and this appears to have happened.

Haakon decided to row from his ship to Cumbrae where it is said he had a mass sung for him.

The interesting thing is that apparently they attached eight anchors to Haakon’s ship and still it drove on into the sound. In all the saga says that five boats were driven up on the shore although claims they were still attached to anchors, which is strange. The saga is quite specific saying that of the five mentioned, three of them were altogether driven onshore and were in trouble.

The Norse believed witchcraft was at play to conjure the storm and there are two wonderful verses that say:

From the wizard lord

Looses many a ship

Made fast on shore.

On board the sea-steeds closely manned,

And that restless bane of earth

On Scottish land, their warshields bearing,

Eager to combat for their king.

I’ll leave part 6 for tomorrow. I hope you’re all enjoying the tale

The forces meet on the shingle and the first encounters. 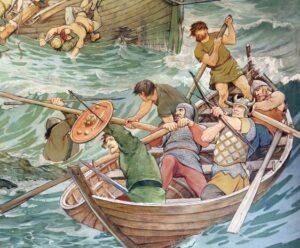 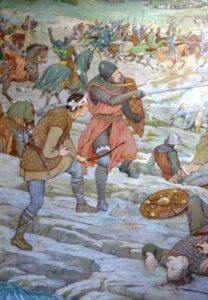 Photo credit is detail from William Hole’s painting The Battle of Largs circa 1899 mural in the Scottish National Portrait Gallery, Edinburgh but readily available in the public domain through wiki. It is a rather romanticised depiction of the events, at least as described by the Norse saga.

As we found out in Part five a huge storm had pushed ships from Haakon’s fleet onto the shore and one of them was the bark (supply ship).

It is said that on Tuesday October 2nd the Scots forces saw the stricken ships and decided to attack them by shooting at them, one can imagine arrows, spears, stones (basically aerial missiles which allowed them to keep their distance from the Norse). The Norse meanwhile took shelter behind the bark and defended themselves, one can imagine by shield coverage. Hardly the glamorous depiction we often see in artistic representations such as the one below by Hole.

Nonetheless, the saga tells us that although a few fell there were many wounded. Haakon responded by taking a cutter to his own ship (one can assume he was on Cumbrae) along with the right type of guy for the job at hand Thorlaug the hot. Once they hit the shore apparently ‘…the Scots fled up country…’

End of day one. Hardly the massive pitched battle we sometimes think of once the Norse hit the shore. The saga tells us that the Norse stayed on the beach all night and on Wednesday morning they went into the buss (unsurprisingly a transport ship), and headed back out to the kings ship.

This is where the information and importance of the bark(supply ship) comes into play. Anyone knows that you cannot sustain a military operation if you do not have supplies to support your host. Keep in mind it was also coming into early winter so not much around etc. I believe this is why the second expedition went to Loch Lomond. They were raiding for supplies. Keep in mind the delaying tactics of the Scots and the comments that the Norse were worried about their declining supplies. This was a very serious problem. Had the bark (supply ship) not been one of the ones on shore I’m not convinced Largs would have happened at all.

The Norse on Wednesday according to the saga armed themselves and rowed back to the shore because it says ‘the Scots had come to the bark, and taken such of the goods as they could get at.’ It goes onto say that when Haakon arrived on shore he ‘…made them strip the bark, and bear her cargo into boats and carry it out to the ships.’

This is a vital point often overlooked by those writing about the events of 1263. It’s sound military tactics to protect your supply routes and resources etc. That’s why Haakon needed to land after the initial storm mayhem.

Contrary to the 15,000 mad Vikings facing up to the 1,500 Scots knights on the shore the Norse saga provides a different view.

‘When the bark was all but cleared, the host of Scots was seen, and most thought the king of Scots himself must be with them, for the host seemed great.’

As this force approached the men pleaded with Haakon to return to the ships and send more men to help them. He offered to stay as most kings would (and any good saga author would include for the son of the said king) but finally was put on a boat and rowed back out to the fleet.

The saga gives us figures as well and it was not unsubstantial, but certainly not into the multiple thousands.

‘By the reckoning of most men there were in all eight or nine hundred men on land.’ (my own note: remember these are eyewitness testimonies and as a good historian Sturla appears to have spoken to many different sources to get confirmation)

It says that of these ‘two hundred men were with Ogmund crow-dance up on a hillock, but the other force stood down on the shingle.’

Trying to locate the exact location of the battle should involve studies of the topography to see which hillock could accommodate 200 men and is not too far from the shingle of the shore.

Curious to know more? Read parts seven, eight and nine in the next blog post!