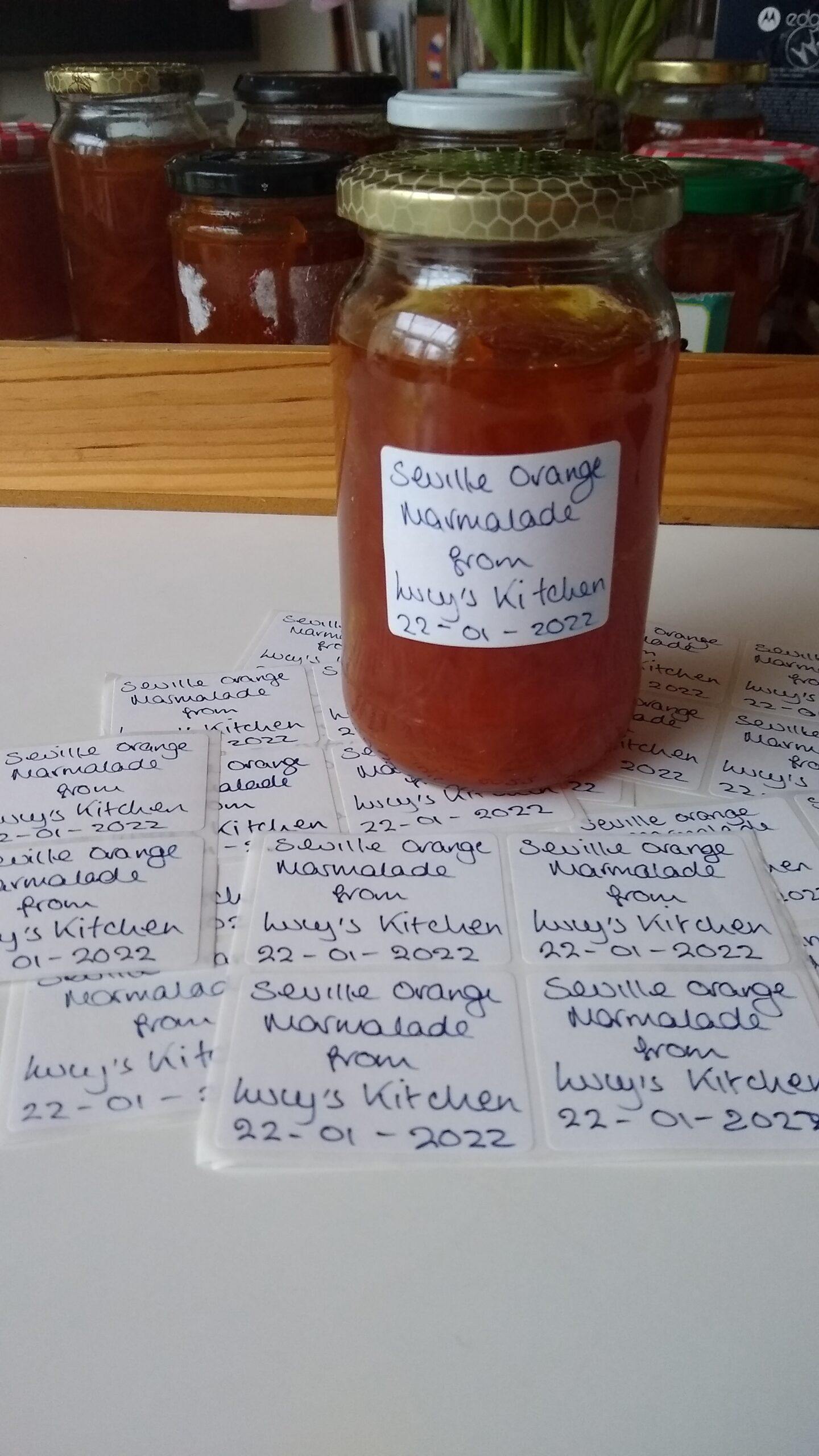 In the northern hemisphere, January is a long, dark and cold month. And this year, we have more than our fair share of rather gloomy days. Thinking about my next recipe to post, it occurred to me that something to brighten the gloom might be more appropriate than the stodgy winter warmers that are our go-to comfort staple at this time of year. Not that I don’t enjoy the bread-and-butter puddings, the Clootie dumplings, the stews and the creamy mash potatoes – Yum!  – but towards the end of January, I’m getting impatient for Spring and brighter days. Another prompt to share this recipe was from Carol Hunter Sullivan. Carol has a FB page Hunter One-Name Study and will be the tour guide on the Scottish Tour coming over from the U.S.A. in September which will coincide with the Clan Hunter International Gathering 2022.

Oranges – bright, cheerful and very versatile. And at this time of year in plenty. A good reason to share with you my Seville orange marmalade recipe.. 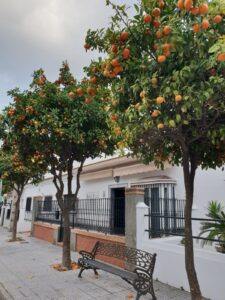 In December, friends of ours were in Chipiona in Spain for the Christmas holiday. Together with their 3 grown-up daughters and entourage, they landed first in Seville where they took in the sights, before travelling the short distance to the coast, Chipiona and the (relatively) balmy temperatures of the Spanish costa. In December it was well above our 8 degrees (Celsius) here in my home in the Netherlands – which in itself wasn’t as cold as it should be for the time of year – and they enjoyed a warm holiday.

At the same time, in my small conservatory, the lemons on my little lemon tree, which I’d had as a present from the same friends, were turning a beautiful yellow colour. I felt a photo of the harvest was due, (4 lemons), so that they could see that I was able to grow fruit from this tree, one of the most difficult to nurture far away from its comfort zone in the Mediterranean. In return they sent me a photo from Chipiona, of orange trees laden with fruit. So much that the fallen fruit lay discarded on the street under the trees. The contrast hit me hard! All citrus fruit of any merit must be imported to those countries prone to cold, damp climates. 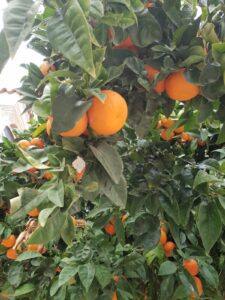 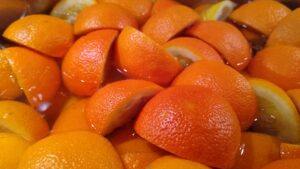 I live in the Netherlands and it just so happens that another good friend of mine lives near our Dutch metropol The Hague. The Hague is very multicultural, it is home to a myriad of consulates and expats. It is also home to what is known as the largest market in Europe, De Haagse Markt. Every nationality is represented with its own specialities. Every nationality’s delicatessen is to be found right there and should you wish to lay down roots here, you would not be homesick for your favourite national dish for long!

And so it is that my friend in The Hague is able to source – quite easily – some fine, bitter Seville oranges with which to make some marmalade. Initially, I asked for 2kg. Then I thought this might not be enough, so I asked for 4kg. Huge mistake! The result was nearly an entire weekend’s work and 30  – yes…30 (!) pots of marmalade. 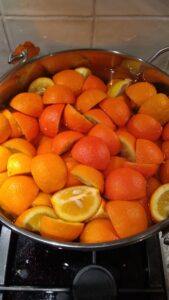 Marmalade was made in Spain and Portugal long before it came to the British Isles. Although you wouldn’t automatically associate Seville orange marmalade with Scotland, yet the earliest record of ‘orange marmalat’ dates back to 1683 from an early Scottish manuscript recipe book written by Helen, Countess of Sutherland of Clan Sutherland. Lady Sutherland’s husband was John Gordon, the 16th Earl of Sutherland, an army officer who was honoured following the defeat of the 1715 Jacobite rebellion. Another earlier recipe from 1677, is written by one  Eliza Cholmondeley and the recipe book is held in the Cheshire Archives and Local Studies.

And then we have Dundee marmalade – the mother of all marmalades. Legend has it that in the 18th century a Spanish cargo ship laden with bitter oranges was damaged in a storm and limped into the harbour of Dundee to seek refuge. The cargo was deemed unfit for sale, but a canny local merchant by the name of James Keiller, bought the lot and his mother turned the bitter oranges into marmalade and this became the forerunner of the famous Dundee marmalade we know today. The Keillers owned a confectionary shop in Seagate, Dundee, which was already making jams from other (soft) fruits. In 1797, James Keiller started the first marmalade factory in the world. This commercially produced breakfast condiment is still in production and is still as popular as it ever was. But what makes Dundee marmalade different from other marmalades? Originally, marmalade was made as a smooth jelly without any of the chunky, bitter peel to ‘pollute’ the smooth confection. Very like quince jelly. James Keiller’s mother added the peel in small but chunky squares and so added more texture to the mix. When we think of orange marmalade today, we cannot do so without visualising the bitter and chewy chunks or fine shreds of peel  that make it so moreish!

When I went to pick up the oranges from my friend who had so kindly purchased them from the market in the Hague, she offered me lunch. She proudly placed a jar of her own marmalade on the table for me to try.  No wonder – it was truly an award-winning marmalade, with finely shredded peel suspended evenly in a pale orange jam. The taste was light, sweet yet zesty. I felt a sense of doom lingering on my shoulders: I would never be able to reproduce this golden prize! 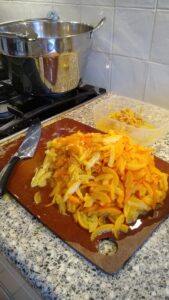 Making marmalade is personal: you are making it for you. Preferences differ and the joy of making it yourself is that you can adjust the technique and the ingredients to suit your taste. 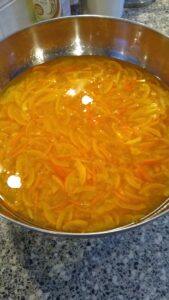 The recipe I am including here, is a mix of two recipes plus my own personal touch. My mother’s marmalade is, I feel, second to none: chunky enough not to have an overbearing mouthful of peel at every bite. Bitter yet citrusy, leaving a fresh bright aftertaste in the mouth. For more clarity on the technique, I also consulted an icon of British cookery: Delia Smith. She has some very practical advice which I find very helpful. My own touch is the colour: how long I can boil the mix so that it has that deep orange colour without it catching on the bottom of the pan and, consequently, burning.

Large preserving pan; A pin; A very sharp knife; A large wooden spoon; A large bowl; A large plate; A few small saucers, put in the fridge to get cold; A large square of muslin / cheesecloth; Pots / jars with lids for potting up the marmalade, previously sterilised in the oven; Small round waxed discs for putting on top of the filled pots before fitting the lids

Start by scrubbing the fruit clean. Then quarter the fruit and put in a large preserving pan (preferably with a lid / covering) and bring to a boil. Once boiling, turn down the heat and let it simmer for between one and two hours or until the fruit is soft. You should be able to push the head of a pin through the peel without any trouble.

At this next stage, you can decide how you want your marmalade to look: finely shredded slices of peel or small square chunks.

For finely shredded slices: take a large very sharp knife and slice the fruit very thinly including the pith. You need time for this, so be warned!

For small squares: put the fruit plus juice from the pan in about 3 lots through the food processor. My mother then counts 8 – 10 seconds, when the fruit is suitably small but not a puree. This takes very little time.

Now gather up the sides of the muslin with the pips inside. Squeeze the muslin over the preserving pan so that the jelly-like liquid (the pectin) drains into the pan. If there is liquid on the plate, pour this into the pan as well. The more pectin you have the better the marmalade will set.

Now return all the pulp (peel and liquid) to the preserving pan. Add the sugar. My mother always uses plain granular sugar and this seems to work well for her. Delia Smith uses preserving sugar and this works well too, and doesn’t take much time before the marmalade reaches the setting point. I use a half and half  because I want a darker colour to my marmalade and therefore I cook it for a little longer. 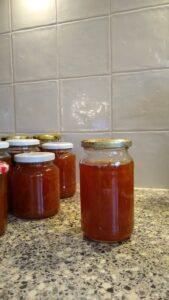 Once you have added the sugar, let the sugar dissolve in the liquid, stirring constantly until all the sugar has been melted into the pulp. There should be no granules showing on the back of the wooden spoon. Once the sugar has dissolved, turn up the heat and watch it like a hawk.

According to my mother there are two stages of boiling:

When it has reached the spitting stage, take out of the fridge one of the cold saucers, put a teaspoon of the liquid marmalade on the saucer and return it to the fridge to cool. Test the setting point by pushing with one finger gently from the side into the middle of the jelly. If it wrinkles then it is ready to pot up. If it is still liquid, let it boil a little longer and keep testing every 5 minutes.

When ready, pour the marmalade into the sterilised jars (I use a jug for this). Be careful as hot marmalade can burn your skin. When all the jars are full, put the little wax discs on top of the marmalade before closing with the lids. Once the jars are cold, the marmalade will set. You can now add your label and be proud of your efforts!

Once cold and set, marmalade can be eaten straight away. However, I have discovered pots of marmalade which have been hiding at the back of a cupboard for two years and it has darkened and matured. The taste is magic!

Having consulted a few friends on their experience on eating a whisky-flavoured marmalade, all have had their doubts as to the added value to the quality of the condiment. I have to say that having tasted whisky-flavoured marmalade in the past, it tastes rather artificial. But I leave it to you to add your favourite tipple if you wish. Add about 6 tablespoons of whisky (or more – but not too much more as the marmalade will not set), when the marmalade is ready to pot up. Leave to cool in the preserving pan for about 10 minutes, stirring occasionally. Then pot up your marmalade.