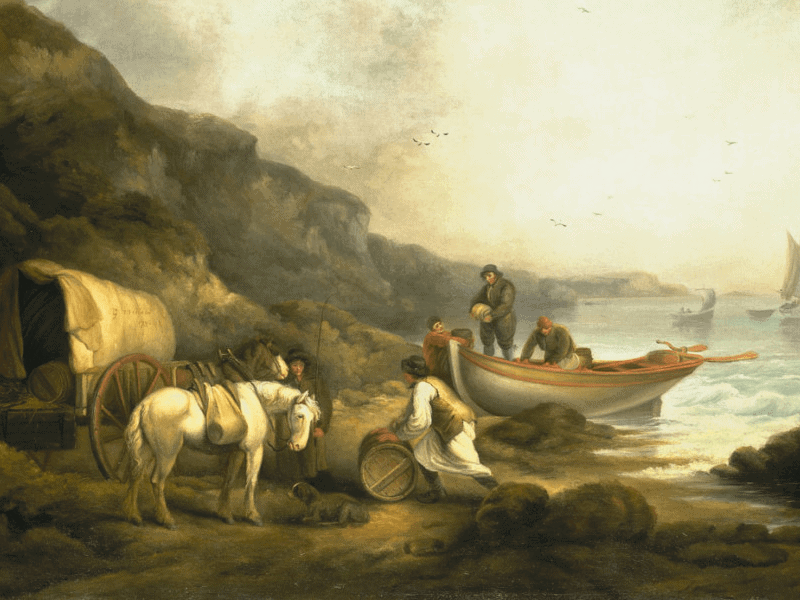 Smuggling is not necessarily synonymous with Scotland, however the fjord-like coastline with lochs stretching inland for miles on end their deep, dark waters protected by high hills and craggy peaks, does seem to offer the perfect backdrop where secrets might be kept.

Additionally, quick changes in weather conditions in Scotland, have also provided a useful camouflage for covert operations in the past! Deep glens and many kilometres of coastline were a Valhalla for the smuggling of contraband: whisky, wood and brandy from Holland were luxury commodities that carried a levy in the form of tax imposed by the government. This made it expensive for the local community to enjoy the luxury of a wee dram, but by dealing ‘on the quiet’ the smugglers could sell the goods a little cheaper to a wide market and still make a profit. A win, win situation. Smugglers had to be canny and creative but often did not escape the men of customs and excise. Our own poet Robbie Burns, often in need of some extra cash, was one the most famous of excise men working the busy coastlines close to the English border.

In the early days, whisky was distilled by local farmers as a way of extra income in the winter time. The first taxes on this popular beverage were levied in 1600 to raise money for the civil war efforts against the English. Needless to say, taxes raised for this purpose, was met with hostility amongst local communities who had little enough provision as it was. Defending your distillery and keeping it hidden was a full-time occupation.

The Glenlivet Estate in the Cairngorm National Park in the North-East of  Scotland was probably one of the first estates to legalise the distilling of whisky in the early 1800s. The then Duke of Gordon of the Glenlivet Estate, realised his farmers needed the income from the sales of illicitly distilled whisky to pull them through the harsh winters and to pay him his rent, so he turned a blind eye. However, the Duke, a powerful man, persuaded the government of the time to relax the levies and set out some regulations for distilling and selling the beverage on legal terms. Again, a win, win situation: the farmers (and the estate) actually profited from the arrangement and the government received regular income tax.

Smuggling was big business carried out on an industrial scale. Virtually everyone in the country was involved at some level and profited by it. Nearly every house had a cellar or store where whisky and other contraband was kept before being moved on to the client when the coast was clear. Smugglers were far from the romantic and intriguing figures often portrayed in novels! They were businessmen and the stakes were high.

It is no wonder then, that Robert Burns carried out his duties somewhat reluctantly. The life of an excise man was not without risk of injury.

He wrote a satirical poem about it:

Intriguingly, as recently as 2018, a secret door was found in the cliff underneath Culzean Castle on the coast of Ayrshire by volunteers working with the National Trust of Scotland. Beneath this mighty castle, once the seat of the Kennedy Clan, archeologists have found caves and evidence which suggests they were occupied by folk as far back as the Iron Age. There is a labyrinth of tunnels and caves which, allegedly, were used for smuggling during the17th and 18th century and it even boasts its own ghost! For full details click on the website: https://www.smithsonianmag.com/smart-news/hidden-medieval-door-leading-smugglers-caves-discovered-underneath-scottish-castle-180970172/

Smuggling along the Clyde is nothing new and is still going on today. In 2014 police discovered a stash of cocaine in a ship from Columbia bringing coal into Hunterston. Four Dutch nationals were also arrested and tried at Leeds crown court. The police working with their international colleagues, were able to make more arrests in the rest of the UK and abroad which were connected to this incident.

A beautiful walk of about 2 hours will take you along breathtaking views of the Clyde and the west Highlands beyond. The walk starts at Dundonald Castle which is about half an hour south of Hunterston by car along the coast road. You walk through woodland and villages to the coastal town of Troon. The route was a well-worn path for smugglers. Click here for the leaflet with more information and a map. And click here for video of the route.

For more about smuggling and other stories visit: Roger McCann’s blog: Whisky Smuggling in Glenlivet.