Parts three and four of The Battle of Largs retold in nine parts by Todd Ferguson after research by Glasgow Archaeological Society.

Todd Ferguson is a local councillor for North Ayrshire, Scotland. Born and bred in West Kilbride, Todd takes a huge interest in his hometown, both the past and the present. Next to politics, he is a graduate of archaeology and in this re-telling of the Battle of Largs, Todd uses research by the Glasgow Archaeological Society which adds depth to his story.

The Battle of Largs part three

The adventure begins (and some awesome references about artefacts) 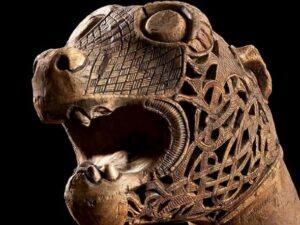 Following the letters received from kings in the western isles about certain atrocities committed in Skye by Scots under the command of the earl of Ross (who may, or may not have been instructed by Alexander III to carry out the attacks, historians are still undecided) king Haakon collected his forces in Norway.

An interesting part is that it is recorded that king Magnus (Haakon’s son, who would take over in 1263 on the death of his father) is mentioned as offering to go on the voyage, one can assume in place of his father, but Haakon declines with warm words and advises Magnus to oversee the kingdom during his absence. Given that Haakon was already an old man by this stage, 59 years old, and Magnus was a relatively young man of 25, one can only wonder if there might have been a different outcome to the events. Haakon’s reasons are very pragmatic, basically he said he knew the western isles and the politics and preferred to go personally. Given his son would negotiate with Alexander III later on, maybe his father thought it best not to send him.

The saga tells us that Haakon: ‘…had fitted out that big ship which he made them build in Bergen, and which he had designed for his own crossing ship. It had thirty-seven benches and was big besides, and built of oak alone.’

Pretty cool huh. Well, it gets better still. It continues: ‘That ship was made with a splendid Dragon head, all plated with gold; and so too the beaks fitted in the same fashion.’

This will become important later on in part five of the tale (apologies everyone, I didn’t think it was going to be as long as this but it’s important to set the context).

There were many other ships and Haakon sent a number of people across to Shetland and Orkney before he left himself to start finding pilots for their ships (a practice still carried out in modern countries when captains are not familiar with the local seafaring conditions). While here they met king Dougal, a descendant of Somerled, and part of the future Macdougall kindred (if you’ve seen Outlaw King you’ll know they were against Bruce and the most powerful of the Gaelic kindreds in early Scottish history. An aside, Dubhgall basically means black stranger).

Back on track I’ll not go into much detail about the events in the western isles and the harrying of places like Deerness (which is probably Durness) before sailing onto the Southern Isles (ie the Hebrides).

Behind this advance force came Haakon and it was said:

To bulwarks made fast,

With gleam of red gold;

The host of the king

As it skimmed o’er the main

That springs from the sea.’

The following were part of the hand picked crew of Haakon’s ship:

Eric the father of king Dougal

Helgi son of Ivar of Loflo

And others of the kings pages

There are more names but I won’t list them – I’m sure you’ll agree there are some amazing names and apparently many more famous captains accompanied Haakon – this was the A list of attendees in 1263 Norse circles.

Haakon arrives off Largs and parleys with Alexander III 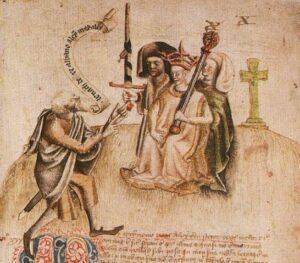 Photo from wiki: Coronation of King Alexander on Moot Hill, Scone. He is being greeted by the ollamh rígh, the royal poet, who is addressing him with the proclamation “Benach De Re Albanne” Beannachd Dé Rígh Alban, “God Bless the King of Scotland”); the poet goes on to recite Alexander’s genealogy. By Alexander’s side is Maol Choluim II, Earl of Fife holding the sword.

I have, in the interests of time, skipped ahead in time cutting out many of the events as Haakon sailed down the west coast collecting men, securing oaths of fealty, using his men to harry certain islands into submission etc

Needless to say there were some who came out to support Haakon such as Rudri who laid claim to ownership of Bute (it is said that Rory’s Isle is where we get Rothesay from). There were some who did not support him such as Eoghan MacDubhgaill of Argyll who was the paternal second cousin of the previously mentioned king Dubhghall mac Ruaidhri.

What happened when Haakon arrived in Arran was that messengers came from Alexander III in an attempt to secure peace and it was decided that Haakon would send messengers to the king of Scots at Novar (New Ayr). According to the Norse accounts the discussions went quite well with Haakons messengers listing all of the western isles he claimed. However, the king of Scots named those that Haakon could not give up which was Bute, Arran and the Cumbraes. Because of this the peace could not be secured.

It is interesting that (obviously with the benefit of hindsight by the author) the Norse saga says that the Scots: ‘spun out matters more and more…’ because, ‘…summer was then passing away, and the weather took to getting worse.’

The delaying tactics were also noted by the Norse saga as a ruse so they king of Scots could gather more forces from up the country and they pleaded with Haakon to ignore the truce and start harrying as they were at that time running very short of supplies (this is a massively important point which will be explained in Part 5).

All the time this was going on Haakon was with his entire force between the Cumbraes and Largs mainland.

Things were about to get serious.

Curious to know more? Read parts five and six in the next blog post!