The History of the Clan Hunter Tartan by Charles Hunter 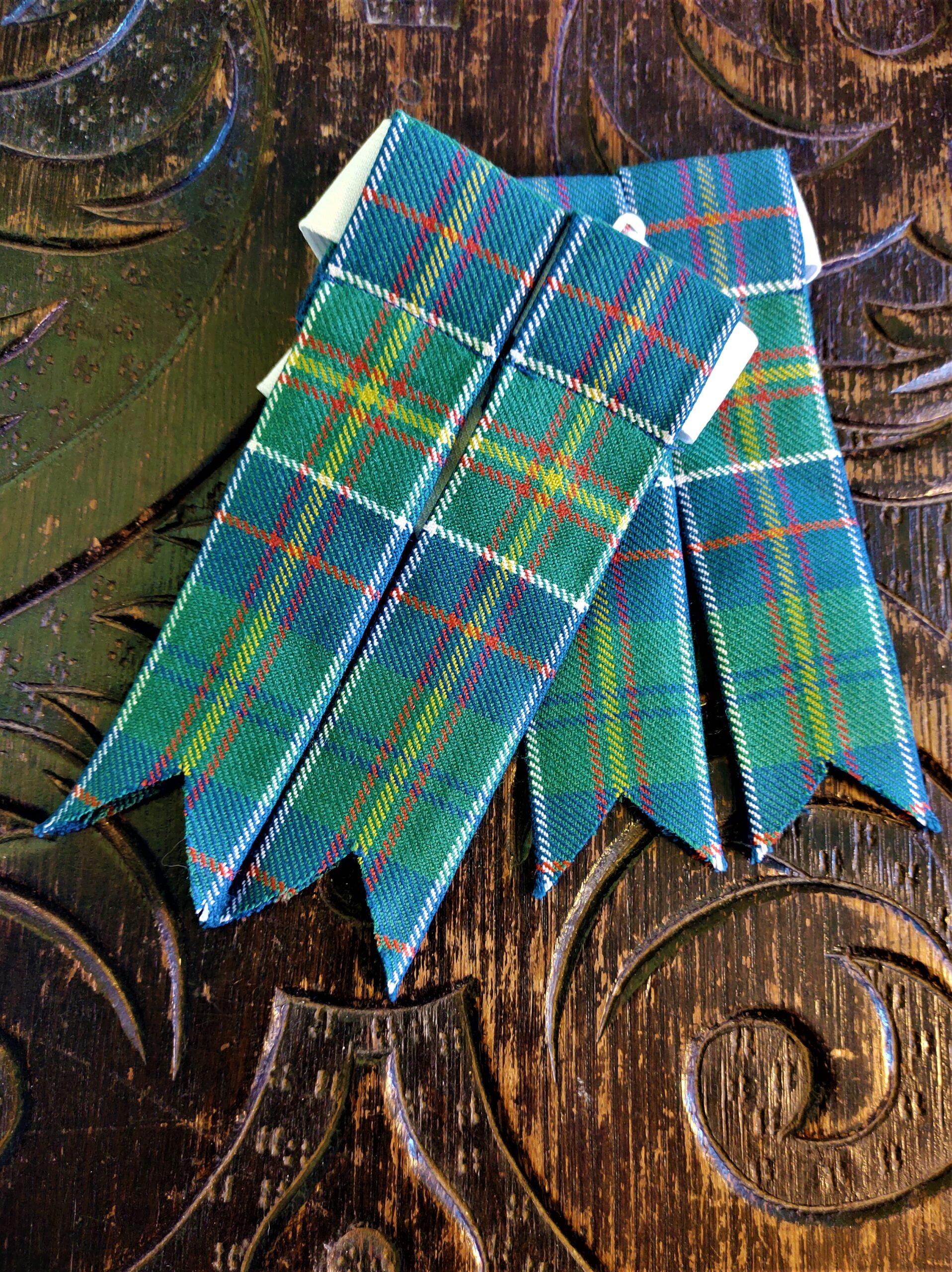 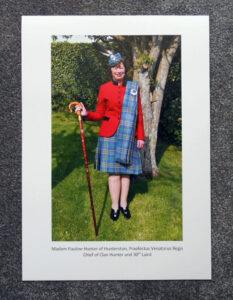 When the Clan Hunter society was set up for the very first time in 1983 there was no specific Clan Hunter tartan. If you went into a shop selling tartan then they would offer you the shared tartan also known as the Hunter Russell Mitchell Galbraith sett. They still do. Why a shared tartan ?

The history of Scottish tartans is well known. Up until the prohibition of wearing tartan by (yes you guessed it) the English after the Culloden massacre, the production of tartan was simple. Cloth would have been woven on very rudimentary cottage industry looms and the dyes used for colouring were locally sourced from natural vegetable and plant extracts. There was no consistency either in sett (design) nor colour.
https://en.wikipedia.org/wiki/Natural_dye
https://en.wikipedia.org/wiki/Dress_Act_1746

This (English) Act of Parliament was repealed in 1782 by King George III. Significance was given to the image of wearing the Kilt and tartan by the visit of King George IV to Scotland in 1822, where he arrived from England fully kitted out in a Highland Outfit (as advised by Sir Walter Scott). This coincided with critical technical developments. Looms had become mechanical and chemical dyes were able to provide consistency of colour. This opened up commercial opportunity.

In several Tartan museums there are original copies of large folio pattern books such as those from weavers Wilson’s of Bannockburn. Wilson’s were in a favourable position to benefit from this resurgent interest of wearing tartan. Many sett designs were subscribed to families and Clans without any specific authority (of the Clan Chief) nor instruction. Wilson’s created many designs or setts as they are called and, in many cases, allocated them as demand favoured.  http://www.tartansauthority.com/tartan/the-growth-of-tartan/tartan-production/weaving-the-cloth/wilsons-of-bannockburn/ .

In the case of the lowland families, many had never worn tartan style clothing and so had no specific interest in this matter. In this way, the Hunters were allocated a sett and as it happened, one shared with 3 other families. Now it becomes more interesting: Anyone may have a tartan sett designed for them and may subsequently register it provided that some basic design and similarity parameters are met. Organisations may also have their own sett. For example, the University of Georgia USA has their own tartan. Each Clan Chief may also change their Clan tartan (imagine how unpopular that would be).

If you join up with the Register https://www.tartanregister.gov.uk  you will discover many more. There are at least 15 listed under HUNTER. There are individual ones, there are ones from branches or offshoots of our Clan and so on.

This situation is further aggravated by two other factors. First there was a habit of having a variety of sett designs for the same family/Clan with different labels: Hunting, Dress, Regimental, etc. Second, the commercial weavers created different ranges of dye colours, again with a variety of names: Modern, Ancient, Reproduction, Muted etc. This of course gave the commercial weavers considerable scope to expand their ranges. It also became a source of confusion for us today. 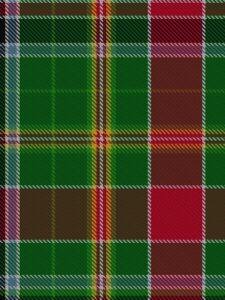 Wilson’s of Bannockburn Hunter tartan of 1790 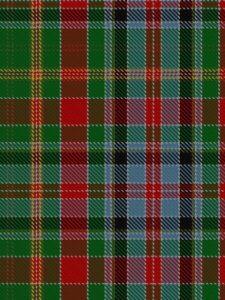 Wilson’s of Bannockburn Hunter tartan of 1819

In 1983 during the setting up of the Clan Hunter society, it was decided to establish our own Clan tartan. The Lord Lyon’s office recommended seeking advice from Capt. T.S. Davidson. Stuart Davidson was the founder of the Scottish Tartan Society which had a museum in Comrie, Perthshire. It took two years to complete the new design and produce the first cloth for members. This required test runs, dye colour trials and ultimately, approval from the Clan Chief at the time.

Originally, Stuart tried to encourage use of an older established sett for us. It was agreed that we could incorporate such an idea but there was also to be a new distinctive sett of our own. This is why there are two Wilson setts listed on the Hunter page of the Tartan Registry. This was a mistake as they had neither any historical association with Hunters nor were they particularly appealing visually. Subsequently these two Wilson setts occasionally appear in books about tartan published after 1985, under Hunter. This explains why they appear in the registry but are named Wilson.

In 1985 we had our own Clan tartan with different cloths available for varied products. 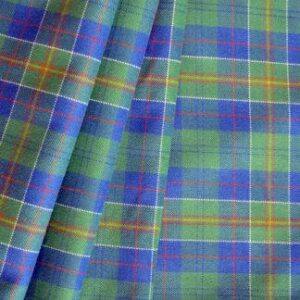 We carefully chose the dye range to be sympathetic with original natural dye colours and to only have one tartan in the one dye range for absolute simplicity even though there is a slight difference in appearance between different cloths and mill weavers used.

I hope that this explanation will clear the air on this subject. If you have further questions then either refer to the links or email me.

The Scottish Register of Tartans      https://www.tartanregister.gov.uk


There is only one way to identify a tartan sett. The Hunter of Hunterston sett as an example is:   G10  B4  G28  B28  R4  B28  W4  G28  R4  G8  Y6.
This is a colour and a thread count. It does not specify what shade of Red or Green or Blue or White or Yellow. It often appears in visual format drawn like a row of military awards. So how does this work?
The easiest way to work out a sett is to go to the centre of the check or square pattern and count diagonally into the corner. This sounds complicated but it is not.
With our Clan tartan it may be easier to work backward. So go to the intersection of the yellow lines and head diagonally into the centre of the check pattern in either direction. The sett is repeated both in the warp and weft (horizontal and vertical) of the loom and this repetition is what creates the familiar check pattern.

Of course, we understand that many Clan members already use one of the other Hunter tartans – mostly the ‘shared’ sett (HRMG). This should not be an issue as it is still a HUNTER sett. Obviously, we encourage familiarity with the newer Clan Hunter sett where possible. It is also a matter of personal preference in which sett (design) you prefer.

I do apologise to those who have been confused by this situation but as our Clan members become more interested in the detail of the many areas we operate, I am happy to explain.
You only have to ask !